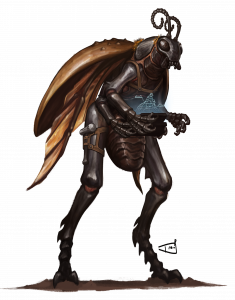 After devastation rained down upon their homeworld in the form of a massive meteor shower that destroyed an entire hemisphere, the surviving pasimachi took to the stars to ensure the survival of their race. Having colonized three new homeworlds since, the pasimachi have forged a greater bond as a people and are one of the most unified races in the known galaxy. They have waged no wars against one another and have developed a hive-like culture in which all pasimachi are considered kin and any conflict with those that are not pasimachi are faced collectively before resolving conflict between each other.

As a relatively new race to spacefaring, pasimachi have an innate sense of curiosity and awe regarding the universe’s wonders, and they have no long-standing traditions regarding most other species or the dangers of the void. This can lead to some naivety when dealing with more “space wise” races, and new encounters are often met with either an overwhelming sense of optimism or among the more jaded members of pasimachi society, with an overly cautious or aggressive demeanor.

Pasimachi are humanoids with the pasimachus subtype and are Medium size.

Pasimachi have a base speed of 20 feet, but their speed is never modified by armor or encumbrance.

Pasimachi can see in the dark up to 60 feet.

Pasimachi are monstrous humanoids with the insectoid subtype.

Pasimachi have a climb speed of 20 feet and gain a +8 racial bonus to Athletics checks to climb thanks to that climb speed.

Pasimachi can cling to cave walls and even ceilings if the surface has hand and footholds. In effect, Pasimachi are treated as being constantly under the effects of a non-magical spider climb spell, save that Pasimachi cannot cling to smooth surfaces. This trait doubles the normal +8 racial bonus to Athletics checks to climb normally granted to creatures with a climb speed (to a total +16 bonus).

Pasimachi gain a +2 bonus to their EAC and KAC.

Pasimachi gain a slam attack as a primary natural attack that deals 1d4 points of damage.

Pasimachi receive a +4 racial bonus to their KAC when resisting bull rush or trip attempts while standing on the ground.

The average pasimachus is a beetle-like monstrous humanoid that stands around six feet tall, has a bulky build, and has either a black, green, or reddish-brown exoskeleton.

They have three segmented digits on each hand and foot, and toughened shell-like wings (known as elytra) cover their backs, hiding and protecting vestigial hind wings. They have multifaceted, black eyes, and a pair of sinuous antennae that reposition themselves according to the pasimachus’ mood, which is useful for those that interact with pasimachi, since they don’t have any other recognizable facial expressions that communicate mood or tone.

Pasimachi and dwarves have somewhat of a rivalry, as dwarven craftsmen look down upon the comparatively crude workings of the pasimachi, and the pasimachi feel that dwarven craftsmanship is ostentatious. Watching pasimachi and dwarves argue amuses many other races quite a bit, and so most other humanoids welcome pasimachi openly, despite their insectoid appearance, which can be startling to those who do not expect to encounter them.

Pasimachi have a strong attachment to their past; those that maintain a positive perspective view their race’s history as a testament to their strength and ability to survive any adversity, while those that have a negative outlook tend to focus on the tragedy of their home planet’s destruction. Either way, they tend to hold grudges, fervently seek to repay debts, and form attachments to people, places, and things quite easily.

Pasimachi are builders; not in the same way that dwarves are craftspeople, but pasimachi tend to want to create things that will last. Their most populous planet, Colmea, has grand, mountain-like hive-cities that were constructed to mimic the largest mountain ranges from their original homeworld, Coi-Linea. They also build grand tombs to honor their greatest leaders and heroes, temples for their gods, and massive public works projects that benefit millions of people. When part of mixed societies, they push for similar projects, just so that they can be a part of their construction.

Prior to the destruction of their homeworld nearly 700 years ago, pasimachi were a fractious species, with constant infighting between clans. Since leaving their uninhabitable home planet, the pasimachi have set aside their rivalries and worked to strengthen the bonds between their peoples. Now, the clans work together to ensure the survival of their race, like worker bees doing their part to ensure the success of their colony, and are stronger than ever. If there are any dissidents among them, they keep such activities carefully hidden.

Within their own clans, pasimachi are prone to demonstrations of strength and battle prowess.

They also carve runes into their exoskeletons, in a similar fashion to other races tattooing their skin, to proclaim their allegiance to their clan, or intimidate their rivals.

Generally even-tempered, pasimachi can be prone to explosive behavior when pushed to extremes. Most pasimachi are neutral-good, working together for the betterment of their society, but not concerning themselves overmuch with following rules or established procedures to get the job done. They prefer to worship deities of community, protection, and travel, as those are the gods whose values most closely mirror their own.

Many pasimachi who choose to lead lives of adventure often seek out new worlds that could potentially be settled by their people.

They are not a race that is particularly prone to conquest, so finding worlds unclaimed by other races is preferable to territorial disputes. However, they are fierce protectors of their homes, families, friends, and possessions; almost to a fault.

The following racial traits may be selected instead of the standard racial traits for pasimachi. Consult your GM before selecting these options.

Acidic Spittle: Capable of breathing out sprays of acid, pasimachi with this trait may breathe a blast of acid once per day as a standard action that deals 2d6 damage in a 30’ cone. All creatures within the affected area must make a Reflex saving throw, DC 10 + ½ the user’s character level + the user’s Constitution modifier. Those who succeed at the save only take half damage from the attack. This trait replaces expert climber.

Chitin Horn: Sprouting a large, sharp growth of exoskeleton from the head, a pasimachus with this trait gains one natural gore attack as a primary natural attack that deals 1d4 piercing damage. This trait replaces shell slam.

Exhale Fire: Capable of breathing out gouts of flame, pasimachi with this trait may breathe a blast of fire once per day as a standard action that deals 1d6 damage in a 15’ cone. All creatures within the affected area must make a Reflex saving throw to avoid taking damage. The save DC against this breath weapon is 10 + ½ the user’s character level + the user’s Constitution modifier. Those who succeed at the save take no damage from the attack. This trait replaces shell slam.

Flight: Some pasimachi have stronger, larger hind wings than their peers. These pasimachi have a fly speed of 30 feet with clumsy maneuverability. This trait replaces hardened carapace and stability.

Lasher: Having longer and more finely-controlled antennae than most pasimachi, those that possess this trait are capable of making attacks with them. Pasimachi have long antennae that they can use to make attacks of opportunity with a reach of 5 feet. Their antennae are capable of making a single secondary natural attack, allowing you to attack with them at a -5 penalty along with your other attacks. This attack deals 1d8 points of damage plus the user’s Strength modifier. This trait replaces hardened carapace.

Light Affinity: Certain pasimachi are immune to light-based blindness and dazzle effects, and are treated as one level higher when determining the effects of any light-based spells or effects they cast (including spell-like and supernatural abilities). In addition, once per day a pasimachus can emit light similar to that of a torch for a number of minutes equal to its character level. This trait replaces hardened carapace and stability.

Swarming: Pasimachi are used to living and fighting communally with other members of their race. Up to two pasimachi with this trait can share the same square at the same time. If two such pasimachi that are occupying the same square attack the same foe, they are considered to be flanking that foe as if they were in two opposite squares. This trait replaces shell slam and stability.

Tunnel Master: Accustomed to digging and tunneling, pasimachi with this trait gain a burrow speed of 30 feet. They also gain a +1 bonus to Physical Science checks involving geology and to Survival checks made while underground. This trait replaces climb, expert climber, and hardened carapace.

While most pasimachi follow the general model of the pasimachi, there are many subspecies of pasimachus that differ from the standard. Those subspecies manifest different characteristics from their peers in both appearance and ability.

Presented here are 9 variant pasimachus heritages for PCs to choose from. From the bioluminescent fireflies to pasimachi with long antennae that they wield like whips, some pasimachi were bred for traits that may prove useful to an adventurer. If you choose one of these subspecies, you should work with your GM to ensure that your character’s appearance matches with the type chosen. The racial traits that are listed in each entry replace standard pasimachus traits just as they do above.

Mounted atop a sleek but deadly enercycle styled after a huge beetle, the bombardier beetlecycle rider charges into the fray with ferocity.

She shatters formations and her bombardier beetlecycle shreds the armor of her foes as they charge past the twisted remains of their enemies, surging forward onto victory.

2nd-Level: Battle Beetlecycle (Ex) At 2nd level, a bombardier beetlecycle rider builds herself a sleek, beetle-shaped enercycle from whatever parts she has scrounged up during her adventuring. This cycle functions as a Basic Enercycle which the rider can modify and repair using her Engineering skill, even untrained if necessary. This cycle is so haphazardly built that only the creator can ride it reliably. Any other creature trying to pilot the beetlecycle takes a -5 penalty to all Piloting checks and attack rolls while riding, and even vehicle actions which would not require a check require a Piloting check with DC = 10 + the bombardier beetlecycle rider’s level by anyone other than herself trying to pilot it.

4th-Level: Armor Crusher (Ex) You’ve become adept at ripping through armor using both your weapons and your cycle itself. At 4th level, the bombardier beetle rider receives a +2 bonus to checks made to sunder an item while mounted. This bonus stacks with the bonus granted by Improved Combat Maneuver and similar feats. In addition, the rider has installed a special battering ram on the front of her cycle which can be used to attempt a sunder combat maneuver instead of a standard ram action. If the attempt is successful, the beetlecycle takes only ¼ the normal damage from the collision. If the target has no armor, the beetlecycle deals damage to the target itself as normal.

8th-Level: Hovering Beetle (Ex) At 8th level, the bombardier beetlecycle rider is able to make a significant upgrade to her beetlecycle. The beetlecycle’s base statistics become that of a Hover Pod. Any upgrades the rider has done to her cycle are carried over to its new version.

12th-Level: Vengeful Rider (Ex) At 12th level, a bombardier beetlecycle rider’s cycle becomes almost like an extension of her own body. Double the threat range of any weapons wielded during a charge while riding the beetlecycle. This increase does not stack with other effects that increase the threat range of the weapon. In addition, whenever an opponent makes an attack of opportunity against you or your cycle, you may make a sunder attempt against that opponent as an immediate action. This sunder attempt is made before the target’s attack resolves, and if your attack is successful, the damage is increased by half (+50%).