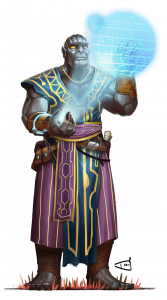 Hailing from a verdant world known as Qundin, the manu have made a meteoric rise to the stars, because their race was considered little more than primitive savages a few millennia ago. Now they boast one of the most technologically advanced civilizations in the known universe, pioneering some of the most innovative magitech available.

Most manu live productive lives working to improve some aspect of manu culture or to provide some lasting work that will be remembered for many generations to come, but some were born to seek adventure across the stars.

Manu are humanoids with the manu subtype, and are Medium size.

Manu gain a +1 racial bonus to Mysticism checks and Engineering checks to craft tech items, and they always treat these skills as class skills. They also gain a +1 bonus to all Craft checks to create magical items.

Once per day, a manu can treat their character level as if it were 4 higher for the purposes of using any level-based class feature (such as a mechanic’s energy shield trick or an operative’s field treatment exploit). This trait does not give manu early access to level-based powers; it only affects powers they could already use without this trait. Regardless of the ability that is boosted, the effect will only last for one round.

Manu are rough, blackskinned humanoids with brightly colored eyes and thick, blunt teeth. Their sharp, sculpted features give them a stoic, slightly menacing presence. Their limbs are slightly longer than a human’s and end at four-fingered hands which are equally oversized.

However, their finely-tapering fingers result in an unexpectedly graceful grasp on tools. Their calves and feet are wider than most humanoids and they walk with a slight hunch. They prefer to wear loose, brightly colored clothing and wide sashes either tied around their waists or draped decoratively over their clothing.

Unlike many species, manu castes are not hierarchical. They are indicative of a chosen cultural path; craftsman, guardian, herald, laborer, and magistrate. Manu craftsmen are typically suited not only to intellectual pursuits, but are also dedicated to bringing to fruition the labors of those pursuits, be they cultural advances, new magics, or advanced technologies. Guardians are both warriors and caretakers of the people, working to serve and protect those that cannot care for themselves. Manu heralds are their leaders, mouthpieces for the people. Among their ranks can be found merchants, diplomats, explorers, and theologians. Laborers lead a simple life, under the guidance of others and being the many hands that make work light. They are farmers, smiths, and builders, and they make up the largest of the manu castes. The magistrates differ from the heralds in that they do not lead, but rather, employ their skills to interpret meaning, either as judges, translators, historians, or philosophers.

There are also the casteless, or “losa” as the manu call them; people who have rejected the system of castes that dominates manu society. They are not criminals; they are the manu that forge their own path, and they often display traits of many of the other castes. These manu are most often the ones that seek out adventure among the stars.

Manu maintain positive relationships with most other races, who wish to trade for manu goods or services. However, they are in fierce competition with goblins when it comes to manufacturing spacefaring technologies, who have stolen or copied many wonders that were first created by manu.

Manu live and work within a caste system that is not immediately obvious to outsiders, as it is not identified by any clothing or appearance on their homeworld. Because of these subtleties, those that are not manu can often have trouble integrating into societies where manu form the majority, leading to a rise in racial tensions. To combat this trend, manu that live with other races often adapt identifying clothing or mannerism to help others to understand which caste a particular individual belongs to. Mistaking a guardian for a laborer could potentially cause a minor incident in a mixed society.

While manu are often of good alignment, this is not necessarily a universal trait. As creative, constructive beings, manu prefer to create rather than to destroy, though their creations tend to be just as chaotic in application as they are to be orderly.

Manu favor deities that promote travel, knowledge, magic, the stars, and trade, or humbler concepts such as community or cooperation.

Some also follow faiths that promote artifice, imagination, memories, or runic writings, finding comfort and solace in creation or remembrance.

Manu infrequently become adventurers, preferring to stay within their societal structures and work to the benefit of their people.

However, those that do often hear the calling of the stars and feel the tugging of inspiration and exploration.

The following racial traits may be selected instead of the standard racial traits for manu. Consult your GM before selecting these options.

Goblinfoe: Competition between manu and goblins can be so fierce that some manu develop a deep-seated animosity toward goblins that can drive them to be reckless. Manu with this trait gain a +1 racial bonus to attack rolls against goblins and a +2 bonus to all saving throws against fear effects. This trait replaces master tinker.

The mystic technician is one of the master craftspeople of the manu race, capable of creating magitech items with great speed and ease. They use these items to help them pursue greater marvels of innovation to improve their lives, and the lives of their friends and fellow citizens.

2nd-Level: Assayer (Ex) At 2nd level, a technician adds ½ his level to Engineering checks to disable devices and Mysticism checks to disarm magical traps. In addition, he gains a +4 insight bonus on Mysticism checks made to identify the properties and command words of magic items in his possession. This bonus increases to +8 at 6th level, and by +4 every four levels thereafter to a maximum of +20 at 18th level.

4th-Level: Magitech Resistance (Su) At 4th level, a technician gains a +2 bonus to all saving throws to resist magical effects caused by magical items. This bonus increases to +4 at 6th level, and to +6 at 8th level.