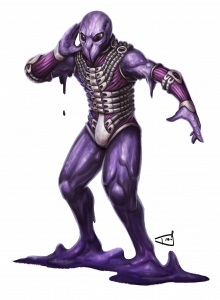 Abiarazi are shape-changing oozes that can take the form of other humanoids. They have latent psychic abilities and voracious appetites. Abiarazi find the concept of ownership an oddity: a quirk shared by other races. However, they understand all too well the concept of consumption, and whether it’s an entire store of foodstuffs or planetary resources, the abiarazi are hungry for more.

Originally hailing from a planetoid known as Vivistaldur, the abiarazi were forced into space when their planet was shattered. Half of the planet was broken into a multitude of vesselsized asteroids that, along with the remaining hemisphere of the planet, continue to orbit within the star system. It is a harsh reminder to all sentient races to not allow these creatures to become overcome by their own insatiable appetites. While their homeworld is incapable of sustaining life, the abiarazi survive on half a dozen other worlds, forming a small empire (as celestial empires go) and attempting to rebuild the glory of their longlost home. Some abiarazi make sacred pilgrimages back to Vivistaldur to search for forgotten cultural relics or lost knowledge; these voyages into their own past are a time-honored tradition. Recovering what was lost by their forbears is considered one of the greatest honors in abiarazi culture. Those that engage in such expeditions are viewed as a mixture of heroes to their people and as beings anointed by some undefined “higher power” that has charged them with the task of restoring to the abiarazi that which had been forgotten. Those that bring back to memory bits of their ancient culture or retrieve ancient artifacts are revered and provided for by their communities.

Ability Adjustments: +2 Con +2 Int -2 Cha. Abiarazi are tough and cunning, but put other creatures off by their strange mannerisms.

Abiarazi are oozes with the shapechanger subtype and are Medium size. They eat and breathe, but do not sleep unless they want to gain some beneficial effect from this activity, such as gaining spells. Abiarazi are neither mindless, nor blind, and so they have no special immunity to gaze attacks, visual effects, illusions, or other attack forms that rely upon sight. Abiarazi are immune to sleep effects.

This may manifest itself in varied ways; overeating, gambling, repeatedly washing after minimal contact with other species, etc. Thus, abiarazi suffer a -2 penalty to Will saves to resist compulsions.

Abiarazi have a long, sticky tentacle that can be used to attack. In humanoid form, this tentacle typically manifests itself as a tongue-like appendage. It is treated as a secondary melee attack and is sticky along its entire surface. A creature hit by this attack cannot move more than 10 feet away from the abiarazi and takes a -2 penalty to EAC and KAC if the lash is attached (this penalty does not stack if multiple lashes are attached). The lash can be removed by the target or an adjacent ally by making an opposed Strength check against the abiarazi as a standard action or by dealing 2 points of damage to the lash (EAC 11, KAC 11, damage does not reduce the abiarazi’s Hit Points). An abiarazi cannot move more than 10 feet away from a creature stuck to its lash, but it can release its lash from the target as a free action, and the abiarazi may pull any creature attached to its lash 5 feet toward it as a swift action if it succeeds in an opposed Strength check. An abiarazi can only have one creature attached to its lash at a time.

Once per day as a standard action, an abiarazi can appear blurry and distorted, granting her concealment against all creatures for up to 1 minute per character level.

The abiarazi can use this ability as a standard action to assume the form of any Small or Medium creature of the humanoid type. If the form it assumes has any of the following abilities, it gains the listed ability: darkvision 60 feet, low-light vision, scent, and swim 30 feet. If used as part of a disguise, this ability grants a +10 circumstance bonus to the Disguise check. While in their natural forms, abiarazi are unable to wear armor or clothing.

Abiarazi are almost constantly hungry and require twice as much food as a normal humanoid. If an abiarazi does not eat at least once every four hours, it gains the fatigued condition.

In their true forms, they are pulpy masses of vein-riddled violet slime, though they often take the form of pale-skinned humanoids with flat, nose-less faces, dark eyes, and scowling mouths.

Abiarazi appear to get along and work well with others of their species. While most abiarazi have no qualms about taking on humanoid forms for extended periods of time, there are some within abiarazi society that consider themselves “purists”, keeping their amorphous, gelatinous forms unless they need to take on another shape for a specific purpose. There are a few pitiful abiarazi that have gone mad, constantly shifting between a plethora of forms, unable to retain a shape for more than a few seconds at a time. This makes them difficult to interact with at the best of times, and dangerous at the worst.

Abiarazi find the commingling of their gelatinous natural forms to be exceptionally intimate, and taboo unless done with a mate in a private setting.

It is also considered impolite to pass through an abiarazi in its ooze form, as it is regarded as an invasion of that abiarazi’s personal space.

Abiarazi often have a difficult time interacting with other races because they are viewed as strange and exotic. Most sentient races do not want to willingly meet an ooze, so they usually assume a humanoid form to interact with other species. When abiarazi want to put someone at ease, they often appear as a member of whatever race that they’re interacting with.

They have no unusual ties to any one race, though they do have strained relations with humans. For reasons that are lost to the pages of time, humans and abiarazi do not typically get along very well, and the shape-changing oozes are not openly welcome in human communities.

Abiarazi are largely secular, not worshipping any set of gods. Those abiarazi that indulge in religion often worship gods of space and of the void, particularly the goddess Alula. There are small communities of abiarazi that worship other gods, but they are far more the exception than the rule.

The ruins of Vivistaldur are a nigh-irresistible draw to abiarazi, and many abiarazi choose to make the journey from the farthest reaches of the cosmos. There are others that choose a life of piracy or conquest, and such abiarazi are often reviled as the scourge of the stars.

The following racial traits may be selected instead of the shapechanger racial trait. Consult your GM before selecting these options.

Cerebrist: The abiarazi gains the following spell-like abilities: 1/day – anticipate thoughts, ghost whip, and reflecting armor. The caster level for these effects is equal to the abiarazi’s level, with a save DC equal to (12 + the abiarazi’s Intelligence bonus).

Ultrapsionic: The abiarazi gains the following spell-like abilities; 1/day?biofeedback, concussion blast, and sustenance. The caster level for these effects is equal to the abiarazi’s character level, with a save DC equal to (12 + the abiarazi’s Intelligence bonus).

Training from birth to control their ability to take on humanoid form, abiarazi use their ability to shapechange to their advantage in combat situations. The morphic warrior capitalizes on his ability, making himself a very difficult target to hit by rapidly manipulating his form.

2nd-Level: Ooze Defense (Ex) Your ooze-like form allows you to move in ways that humanoid creatures could never dream of. You gain a +1 bonus to EAC and KAC. This bonus does not apply when you are flat-footed or off-kilter.

4th-Level: Shapechanger’s Dodge (Ex) You can use your shapechanger racial trait as a reaction when a target opponent declares a melee or ranged attack against you. The opponent suffers a 20% miss chance on that attack and on successive attacks against you until the start of your next turn. You can use this ability a number of times per day equal to 4 + your Charisma bonus.

8th-Level: Doppelganger Defense Your bonus to EAC and KAC from ooze defense increases by an additional +1, and the miss chance granted from shapechanger’s dodge increases by +20% (for a total of 40%).

12th-Level: Combat Mimic (Su) You can use your shapechanger racial trait to perfectly mimic the features of a humanoid opponent in combat, confusing and disorienting him. The opponent you are mimicking takes a -2 penalty on attack rolls against you, as well as a -2 penalty on all saving throws, as long as you are visible to him. At 16th level, your mimicry is so complete that it confuses the target’s allies as well, giving them the same penalties. These penalties last a number of rounds equal to your level in the class in which you took this archetype.

Benefits: You get a +2 bonus to saves versus paralysis, poison, polymorph effects, and stunning.

Benefits: You get a +2 bonus to saves versus paralysis, poison, polymorph effects, and stunning. These bonuses stack with the ones granted by Gelatinous Constitution

Benefits: Once per day if you are struck by a critical hit, as a reaction you can negate the critical hit, making it a normal hit.

Benefits: While you are in your natural form, you are immune to the following: critical hits, flanking, paralysis, poison, polymorph, precision damage, and stunning.