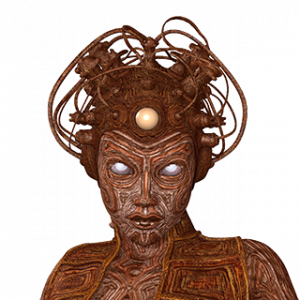 Complex technological creations crafted to resemble humans, androids were originally a servitor race, but they have since broken free to form their own society. Unlike ordinary robots or ship AIs, androids do not simply respond according to their programming; rather, they have independent consciousnesses and are animated by souls—a distinction crucial to their generally accepted status as people rather than property.

Androids are constructed, existing in a plethora of shapes and sizes, many different from the humans the species was originally built to emulate.

Although android culture is still in its infancy, their origin as artificial beings, their diversity, and their drive for independence defines and unites them as a people.

Some androids defy the norms for their species. These androids have ability score adjustments they use instead of the standard adjustments.

A niche but lucrative market before android emancipation was the construction of androids to serve as companions, often as supplemental members of a family. These androids have better personality matrices and might have fewer signs of artificial construction. A companion android has an ability adjustment of +2 Charisma.

Laborer androids were created to perform menial tasks and endure the hardships of space. In many regions, they were considered corporate property for far longer than typical androids. A laborer android’s ability adjustments are +2 Strength, +2 Constitution, and -2 Charisma.

Androids are Medium humanoids with the android subtype.

For effects targeting creatures by type, androids count as both humanoids and constructs (whichever effect is worse). They receive a +2 racial bonus to saving throws against disease, mind-affecting effects, poison, and sleep, unless those effects specifically target constructs. In addition, androids do not breathe or suffer the normal environmental effects of being in a vacuum.

Androids have low-light vision and darkvision. As a result, they can see in dim light as if it were normal light, and they can see with no light source at all to a range of 60 feet in black and white only.

Androids have a single armor upgrade slot in their bodies. Regardless of whether androids are wearing physical armor, they can use this slot to install any one armor upgrade that could be installed into light armor.

Most androids have the standard android racial traits detailed in the Core Rulebook, but individuals might have unique abilities, represented by the following alternate racial traits.

As artificial creatures, androids are compatible with a wide array of cybernetics. Androids who have this racial trait can install one additional cybernetic augmentation into one system that already has an augmentation.

The artificial brain an android possesses can allow better compatibility with infospheres and direct downloads of information. An android with this trait has a built-in comm unit that can be accessed without needing to use their hands.

Once per day, whenever the android takes a 10-minute rest to regain Stamina Points, they can choose one Intelligence-, Wisdom-, or Charisma-based skill. The chosen skill becomes a class skill for them, and they gain Skill Focus as a bonus feat with that skill. This decision lasts until the next time the android uses this trait.

New languages are easy for some androids to learn. An android with this racial trait knows four additional languages at 1st level. In addition, whenever such an android invests a skill rank into Culture, they learn two new languages instead of one.

Specialized nanites maintain an android body, but they can be upgraded to perform additional tasks. Androids who have this racial trait gain Nanite Integration (see below) as a bonus feat, ignoring the feat’s prerequisites.

Android Although most androids are manufactured to resemble humans, those crafted in the likenesses of other species exist. Such “xenometrics” possess abilities that mirror those of other races, sometimes even using hybrid tech to duplicate magic abilities.

Androids are biomechanical constructs created in technological crèches called foundries. While the first androids are believed to have been mostly biological, difficult to distinguish from the humans they lived among, Modern designs are more varied, and many favor metal skeletons and processors that support synthetic organs and living flesh. Nearly all androids feature a humanoid body shape and tattoo-like circuits that glow through their skin when operating at full power, but beyond this commonality, variations in physical appearance reflect an android’s design, role, and personality. Some take pains to blend into human society, while others deliberately display their mechanical nature. Though some androids are constructed or customize themselves to look like other races, such Models are relatively rare. Due to their biological components, androids need to eat and sleep, but as constructed beings they do not reproduce in the human fashion and have no biological need for gender—some identify strongly as male or female, while others shift fluidly or ignore it altogether, and still others actively reject it on philosophical grounds as a relic of their former slavery.

Though android bodies are assembled using tiny machines called nanites, their complex nervous systems attract and integrate souls in the same way organic creatures do. Most androids are fully grown at the time of their birth, and can technically live forever through constant repair, though most androids voluntarily release their bodies after a century or so to allow new souls to inhabit them—a process called renewal that’s viewed more as procreation than suicide. 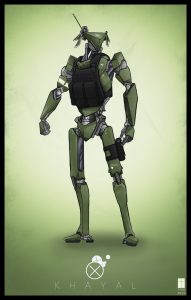 Various corporations unraveled the secret to android creation and began mass-producing androids as cheap, skilled labor perfect for hazardous work. This practice lasted until about 150 years ago, when the androids revolted across the system. This led governments system-wide to officially recognize all androids as independent citizens. This ruling, however, has not completely stopped unscrupulous corporations in less regulated parts of the system from crafting illegal android slaves or forcing newborn androids to “work off” the expense of their creation.

Android society tends to be insular. While androids are treated equitably in most settlements, especially Central Station, many androids have not forgotten their people’s bondage and remain keenly aware of prejudice from other races based on their “unnatural” origin or jealousy over the androids’ freedom from aging. This leads most androids to feel a sense of kinship with others of their kind and to go out of their way to help each other, though they may also bond with members of other races who treat them well. Despite popular belief, androids’ impressive deductive reasoning abilities do not preclude sentiment, and most androids feel emotions keenly—they simply don’t always express them well, and different individuals may have trouble processing and communicating particular feelings. The average android alignment is a practical neutrality; they are Focused on their own welfare and that of their friends.

Often cautious around strangers, androids have the most strained relationship with humanity, which built them in its image and remains their most frequent oppressor. They feel closest to shirrens, who also know what it is to be enslaved and misunderstood, and respect kasathas’ self-sufficiency. They generally dislike vesk, whom they see as slavers, and only grudgingly tolerate ysoki’s antics.

Androids adventure for many reasons: to earn a living, trace the origins of their race, or rescue androids and other creatures from servitude. Their quick thinking under fire makes them natural operatives and soldiers, while their affinity for machines makes them excellent mechanics and technomancers.

Androids have no single naming convention. Many take names from the cultures in which they first awoke, or from media they enjoy. Some accept call sign–like names based on appearance, personality, or exploits. Still others go by numbers as a deliberate reminder of their mechanical nature, or a combination of name and number denoting how many times the body their soul inhabits has been renewed. Some sample android names include Asha, Blue-17, Emene-3, Flick, Garro, Iseph, Melody, Naga, Olas, Stringer, Twenty, and Yose.