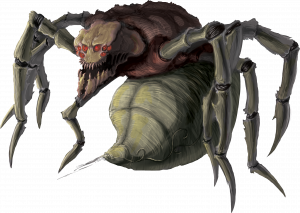 How to Read Stat Blocks

The following section breaks down how to read a creature’s statistics, also called a stat block. Not all creatures have all of the information listed below. If a monster has any entries that aren’t explained here or that differ from the normal class features and other rules for characters, you’ll find them explained fully either at the end of the stat block under Special Abilities or in Universal Creature Rules, where rules that appear in multiple monster entries have been compiled for easy reference. Both monsters and nonplayer characters (NPCs) have stat blocks, and you’ll learn how to build both of them in Creating Monsters and Other NPCs.

Name and CR: The creature’s name is presented along with its Challenge Rating (CR), a numerical representation of the creature’s relative power. As a general rule, monsters with a CR equal to the average level of the characters in your party is about right for them to fight—if the CR is too high, it’ll be too difficult, and if it’s too low, it won’t be a fun challenge anymore.

Alignment, Size, Type, and Subtype: A creature’s listed alignment represents the norm for such creatures; an individual’s can vary as you require for the needs of your campaign. A creature’s size determines its space and reach. Some innate abilities come from the creature’s type and subtype.

Init, Senses, and Perception: This lists the creature’s initiative modifier, followed by its special senses (omitted if it doesn’t have any). Its Perception modifier is listed here instead of in its Skills entry (see below).

Aura: If the creature has a magical or exceptional aura, it is listed here along with its radius from the creature and the save DC to resist the aura’s effects, where applicable.

HP and RP: These entries list the creature’s Hit Points and (if it uses them) its Resolve Points.

Fort, Ref, and Will: The b>creature’s Fortitude, Reflex, and Will saving throw modifiers are listed here, followed by situational modifiers to those rolls.

Weaknesses: This lists the creature’s weaknesses, if any.

Melee: The creature’s melee attacks are listed here, each starting on a separate line. The attack roll modifier appears after the attack’s name, followed by the attack’s damage, damage type, and critical effects in parentheses.

Multiattack: If the creature can make multiple melee attacks with a full action (usually with different weapons), the attacks and attack roll modifiers are listed in this entry, followed by each attack’s damage, damage type, and critical effects in parentheses.

Ranged: This entry lists the creature’s ranged attacks in the same format the Melee entry uses for melee attacks.

Space and Reach: The creature’s space and reach are noted here if they are other than a 5-foot square and 5 feet (those values are the default). Any special reach (from weapons or the like) is listed in parentheses.

Offensive Abilities: This entry lists abilities the creature is likely to use offensively.

Spells Known: If the creature can cast spells (usually due to a mystic or technomancer class graft), its caster level is shown in this entry, followed by the spells it knows (and the associated saving throw DCs, where applicable) and how many spell slots of each level it has available per day. Often, only the creature’s most powerful spells are listed here.

Ability Score Modifiers: The creature’s ability score modifiers (rather than the scores themselves) are listed here.

Feats: Only feats that give situational bonuses or allow for special combat tactics are listed in monster stat blocks. Feats that give the creature a static bonus (such as Improved Initiative) are already factored into the creature’s statistics, and they are therefore not listed.

Skills: The creature’s skills are listed here alphabetically with their modifiers. Creatures are assumed to have whatever tools they need to use the listed skills (such as Engineering) without a penalty.

Languages: The languages most commonly understood and spoken by the creature are noted here, along with any other special means of communication (such as telepathy). You can swap out the languages known for other choices as needed.

Other Abilities: This entry lists abilities and features the creature has that aren’t covered in another line.

Gear and Augmentations: This entry details the gear and augmentations the creature has, which can be altered to suit your needs.

Environment: The regions and climates in which the creature is typically encountered are listed here, though you’re welcome to use the creature in different environments.

Organization: This entry describes typical groupings for this creature type and whether such groups include any other types of creatures.

Special Abilities: All of the creature’s unusual abilities are detailed in this section.