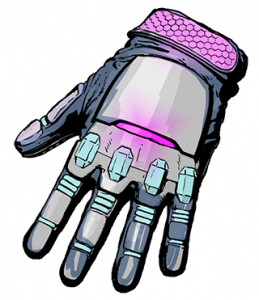 Armor is usually the easiest and most cost-effective way for creatures to protect themselves. Whether you are skimming through space aboard a mercenary vessel, attending a diplomatic meeting on a space station, or descending to a planet’s surface to explore, armor provides you with protection against attacks and hostile environments.

Modern armor is made of many different substances, including carbon fiber, ceramic, fabric, metal, and polymers. Most are constructed from a combination of materials, and some even use archaic materials such as animal hide. Creatures wear armor to protect themselves, but also to express their personal style.

Most suits of armor consist of a helmet, gloves, boots, and a bodysuit that offers head-to-toe protection. Unless otherwise specified, the boots include a functionality that can anchor your feet to a solid surface in a zero-gravity environment, allowing you to orient yourself or return to normal footing when needed.

Each entry on the armor tables starting describes a single suit of armor, with the following statistics.

Price: This is the price in credits of the suit of armor.

EAC Bonus: This is the bonus your armor adds to your Energy Armor Class, which protects against attacks from laser weapons, plasma cannons, and the like.

KAC Bonus: This is the bonus your armor adds to your Kinetic Armor Class, which protects against projectiles, most melee weapons, and other solid objects.

Armor Check Penalty: You take a penalty to most Strength– and Dexterity-based skill checks equal to this number.

Speed Adjustment: While wearing the armor, your speed is adjusted by this number.

Upgrade Slots: You can improve your armor with magic and technological upgrades. This entry shows how many total upgrades your armor can accommodate. Some armor upgrades are larger or more complicated and take up multiple upgrade slots.

Bulk: This is the bulk of the item.

A character’s class and feats determine what kinds of armor they can wear. Further details about wearing armor are below.

If you are wearing armor with which you are not proficient, you take a –4 penalty to both EAC and KAC. A character who is proficient only with light armor can wear heavier armor effectively by selecting the Heavy Armor Proficiency feat.

Modern suits of armor are designed so that you can don or remove armor without assistance.

Don Hastily You can hastily don armor in half the normal time, to a minimum of one full action. The armor check penalty, maximum Dexterity bonus, and armor bonus for hastily donned armor are each 1 worse than normal.

Armor comes in different sizes for different creatures, and you might have to adjust a suit of armor to fit you if it wasn’t made for your race. A ysoki can’t effectively wear armor made for a human, and a kasatha needs to adjust armor that was made for a two-armed creature. If it’s in doubt whether a creature can fit the suit, the GM decides whether the armor needs to be adjusted. When you buy armor new, the purchase price includes any adjustments.

Adjusting Armor If you get secondhand armor that wasn’t tailored for you, you can have it adjusted, which requires a successful Engineering check (DC = 10 + 2 × the armor’s level). Alternatively, you can spend 10% of the armor’s purchase price to have it adjusted by a professional—typically an armorsmith or anyone with multiple ranks in Engineering.

Space can be an inhospitable place, with countless dangerous worlds within it. Unless otherwise specified, all armors protect you from a range of hazards to ensure that you can survive for at least a few days if you must make emergency repairs to the hull of a Starship, explore an alien world, or endure exposure to an environmental breach in a space station. Some armors do this through an environmental field (a minor force field specially attuned to pressure and temperature that does not reduce damage from attacks), while others can be closed with helmets and airtight seals.

The duration of a suit’s environmental protections does not need to be expended all at once, but it must be expended in 1-hour increments. Recharging this duration requires access to a functioning starship or an environment recharging station (publicly available in most technologically advanced or average settlements) and takes 1 minute per day recharged. Most of the recharging stations that replenish devices, such as batteries and power cells, also recharge suits is typically free of price. All other functions on a suit of armor with no duration remaining still work normally.

Armor’s environmental protections reasonably protect you against both cold (temperatures below –20° F) and heat (air temperatures over 140° F). This prevents you from having to attempt Fortitude saving throws to avoid damage from the environment, and it prevents you from taking any damage listed for breathing in the environment. This does not protect against cold or fire damage from other sources or against environments that deal damage without allowing a Fortitude saving throw or breathing the atmosphere (such as lava).

The suits of armor listed in the tables are described below.