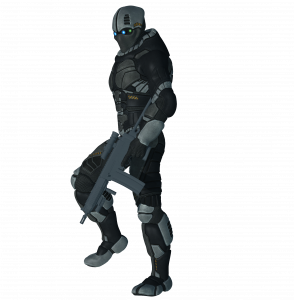 Conflict is an inevitable result of life. On every world that harbors complex living organisms, creatures battle one another for dominance, resources, territory, or ideals. Whether you’ve taken up arms to protect others, win glory, exact revenge, or simply earn a living, you are the perfect embodiment of this truth. You’re an expert at combat of all types but tend to prefer heavy armor and weapons—the bigger, the better. You may be a career soldier, a fresh mercenary recruit, or a lone wolf who rejects authority, but whether rushing in for hand-to-hand combat or firing Tactical barrages, you’re a consummate warrior, never hesitating to put yourself in the Line“>line of fire to protect your friends.

Key Ability Score: Your Strength helps you attack up close in melee and carry heavier weapons and armor, while your Dexterity helps you fire weapons from a distance and dodge returning fire, so you should choose either Strength or Dexterity as your key ability score. Once made, this choice cannot be changed. A high Constitution score allows you to soak up more damage.

You have a preferred fighting style that represents the type of soldier you are. Each fighting style is composed of various style techniques that you learn as you gain experience. You must pick one fighting style upon taking your first soldier level, and once made, this choice cannot be changed.

Descriptions of the fighting styles you can choose from are shown here.

At 1st level and every 4 levels thereafter, you gain a style technique unique to your primary fighting style.

At 2nd level and every 2 levels thereafter, you gain a bonus feat in addition to those gained from normal advancement. These bonus feats must be selected from those listed as combat feats.

Whenever you gain a new bonus feat, you can also choose to replace one of the bonus feats you have already learned with a different bonus feat. The feat you replace can’t be one that was used as a prerequisite for another feat or other ability. You can change only one feat at any given level, and you must choose whether or not to swap the feat at the time you gain the new bonus feat.

At 3rd level and every 4 levels thereafter, you learn a trick called a gear boost that make you better with a particular type of weapon or armor. Choose from the gear boosts listed below. Some gear boosts require you to reach a certain soldier level to select them; this level is indicated in parentheses after the boost’s name.

As a full action, you can make a single attack with a magic weapon against a single foe. If the attack is a ranged attack, the target must be within the first range increment. Even if the attack normally affects an area or multiple targets, it affects only your selected target. If your attack hits, you can spend 1 Resolve Point to force the target to attempt a Will saving throw (DC = 10 + half your soldier level + your key ability score modifier). If the target fails its save, it can’t voluntarily move from its current space for 1d4 rounds. This has no effect on involuntary movement, but it does prevent the creature from teleporting or moving to another plane. Once you’ve struck a foe with this attack, whether it succeeds at or fails its saving throw, it is immune to this ability for 24 hours.

When you are wearing armor, you gain a +1 insight bonus to your Kinetic Armor Class.

You gain a +2 insight bonus to damage rolls with weapons that have the blast special property (such as a scattergun). This extra damage applies only to creatures within 10 feet of you; creatures farther away take the normal amount of damage. This bonus increases by 1 for every 4 soldier levels you have.

You gain a +1 insight bonus to damage rolls for weapons in the projectile category. This bonus increases by 1 for every 4 soldier levels you have.

You add half your soldier level to damage rolls using weapons with the operative special property.

When you hit a creature with a weapon in the cryo category, that creature’s speeds are reduced by 10 feet for 1 round, to a minimum of 10 feet.

You gain a +1 insight bonus to attack rolls with weapons in the laser category.

Add an additional bonus equal to half your Strength bonus to damage rolls with melee weapons.

Whenever you’re wearing armor (including powered armor), you reduce your total armor check penalty by 1 (minimum 0) and total speed adjustment by 5 feet (minimum adjustment 0 feet). The armor check penalty reduction increases by 1 at 7th level and every 4 levels thereafter. At 11th level, you reduce the armor’s speed adjustment by 10 feet (minimum adjustment 0 feet). These benefits stack with similar effects, such as from the guard fighting style’s 1st-level style technique.

You are expert at setting things on fire with plasma. If your attack roll with a weapon in the plasma category is a 19 (the d20 shows a 19), and the attack hits your target, the target gains the burning condition. The condition deals 1d4 fire damage if the weapon has an item level of 1st-6th, 1d8 if its item level is 7th-14th, and 2d8 if its item level is 15th or higher.

When you attack with a weapon with the explode special property and a radius of 10 feet or greater, you can increase the radius of the explosion by 5 feet.

When you hit a creature within 30 feet of you using a weapon in the sonic category, the sonic energy continues to resonate within that creature, giving it the flat-footed condition for 1 round. If you hit multiple creatures at the same time (such as with an automatic, blast, or explode weapon), only the creature nearest to you or to the center of the explosion (your choice if multiple creatures are equidistant) is affected.

You gain Weapon Specialization as a bonus feat for each weapon type this class grants you proficiency with.

You choose another fighting style. Once you choose this second style, it cannot be changed.

As a standard action, you can make a single attack against an enemy. If the attack hits and does not kill your enemy, you can expend 1 Resolve Point to force the creature to succeed at a Fortitude save or die. Once you’ve used this ability on a creature (regardless of whether or not you forced it to attempt a Fortitude save), that creature is immune to your kill shot for 24 hours.

Soldiers have access to the following alternate class features.

This replaces the soldier’s proficiency with heavy armor and heavy weapons.

Whenever a prone opponent that you threaten attempts to stand up from prone, as a reaction you can make a melee attack against that opponent. This functions similarly to an attack of opportunity, except your attack resolves before the opponent’s action (meaning they’re still prone when your attack roll and damage are resolved). You cannot use this attack to make a combat maneuver, even if you have another ability or item that would normally allow you to do so.

Whenever you have an opponent pinned, that foe can’t speak or perform actions that involve speaking or uttering sound using their voice (such as roaring, singing, and so on). Normally this prevents the target from using language-dependent abilities unless they have limited telepathy or a similar ability.

When you use the Cleave or Great Cleave feat, you don’t take that feat’s penalty to your Armor Class.

When you use the Lunge feat, you don’t take that feat’s penalty to your Armor Class.

Whenever you attack an opponent with an unarmed strike and the result of your attack roll exceeds the foe’s KAC by 8 or more, that foe gains the grappled condition as if you had successfully attempted a grapple combat maneuver. You must be at least 11th level to select this feat boost.

Whenever you succeed at an attack roll to grapple an opponent, you can remove one item from the target’s body that can be easily accessed, as described by the grapple combat maneuver, instead of imposing the grappled condition on your foe.

Whenever you have at least 1 Resolve Point, you can stand from prone as part of any other action you take. Creatures with the moxie racial trait can select this feat boost even if they do not have the Kip Up feat.

As a standard action, you can make two attacks against a single foe, taking a –3 penalty to each attack. Both attacks must be made using small arms or operative melee weapons. If both attacks hit and deal the same type of damage, combine the damage and apply damage reduction, resistances, vulnerabilities, and similar effects only once.

Whenever you successfully use the disarm combat maneuver against an opponent, you can knock the disarmed item up to 10 feet away from the opponent in a direction of your choice.

Whenever you use the Cleave or Great Cleave feat, you can make subsequent attacks against foes that are not adjacent to one another, provided each foe is within your reach.

When you use Spring Attack, you can select two targets to attack during your movement instead of one. Both attacks are made with a –4 penalty. All restrictions of Spring Attack apply to both targets, and your movement does not provoke attacks of opportunity from either target. You can’t target the same creature twice with this ability. You must be at least 7th level to select this feat boost.

When you use Shot on the Run, you can select two targets to attack during your movement instead of one. Both attacks take a –4 penalty. All restrictions of Shot on the Run apply to both targets, and your movement does not provoke attacks of opportunity from either target. You can’t target the same creature twice with this ability. You must be at least 7th level to select this feat boost.

Whenever you deal damage to an opponent with a ranged attack on your second or subsequent turn in a combat, you gain a +1 circumstance bonus to your next melee attack against that opponent, so long as this melee attack occurs before the end of your next turn.

Whenever you would gain a gear boost, you can instead gain a technique called special ops training that makes you better with one or more skills commonly used to perform special military operations.

Choose one class skill you gained from the soldier class or a soldier class feature. You gain an insight bonus to this skill equal to one-third your soldier class level (minimum +1). You can select this special ops training more than once. Each time, you select a different class skill.

Choose one of the following skills: Bluff, Computers, Disguise, Perception, Piloting, or Stealth. Add the chosen skill to your list of soldier class skills, and gain a +1 bonus to checks with this skill. You can select this special ops training more than once. Each time, you select a different class skill.

You excel at protecting others, usually taking the hits meant for your charges.

Dexterity is most important because you need it both to hit and to increase your AC, but you also need plenty of Constitution and enough Strength to comfortably carry and use heavy weapons and armor.

You specialize in taking the fight to your foes, moving quickly and aggressively to strike them down with melee weapons.

Strength is most important because you need it to hit your foes and deal more damage, but don’t ignore Dexterity or Constitution.

You are skilled at dealing death from afar.

Dexterity is your most important ability score because you need it both to hit and to increase your AC, but you’re flexible in terms of your other ability scores.

You specialize in the use of magic to improve your combat ability.

Dexterity is your most important ability score because you need it both to hit and to increase your AC, but Strength is also important for your heavy weapons, and you need a bit of Wisdom for Connection Inkling.